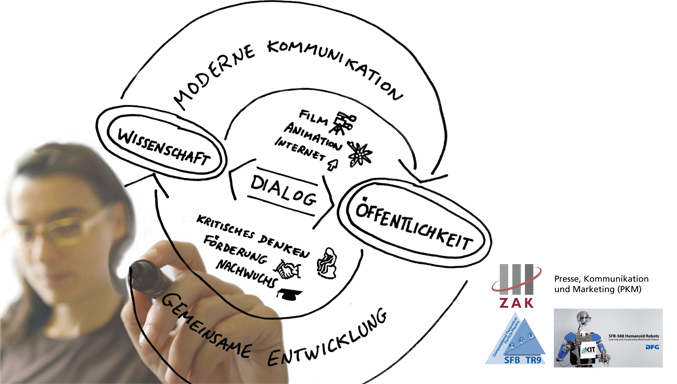 Most laypeople have only a limited understanding of what a controlled particle collision is, to say nothing of the purpose of carrying out such a collision. Similarly, the development of robots that resemble humans is often met with unfounded fears. Researchers, conversely, frequently lack the means to illustrate their work and drum up enthusiasm for it among the general public. InsideScience takes up this problem. The goal of this project, which is sponsored by the German Research Foundation, is to foster dialogue between science and society.

Film is a helpful medium toward this end: a balanced mix of film and animation can do wonders to illustrate the theoretical foundation of a particle collision, or shed light on the inner life of a robot. Strengthening scientists’ ability to use new media and communicational tools is integral to the implementation of this project. Targeted workshops and training sessions prepare researchers for action both in front of the camera and behind the scenes. InsideScience makes use of the Internet to distribute the films, thereby ensuring interaction with the general public and stimulating critical dialogue.

Impressions of the Conference on the Role of Web 2.0 Culture in the Informal Communication of Scientific Knowledge, 3 – 4 December 2011

Got curious? Find more films in our knowledge space!